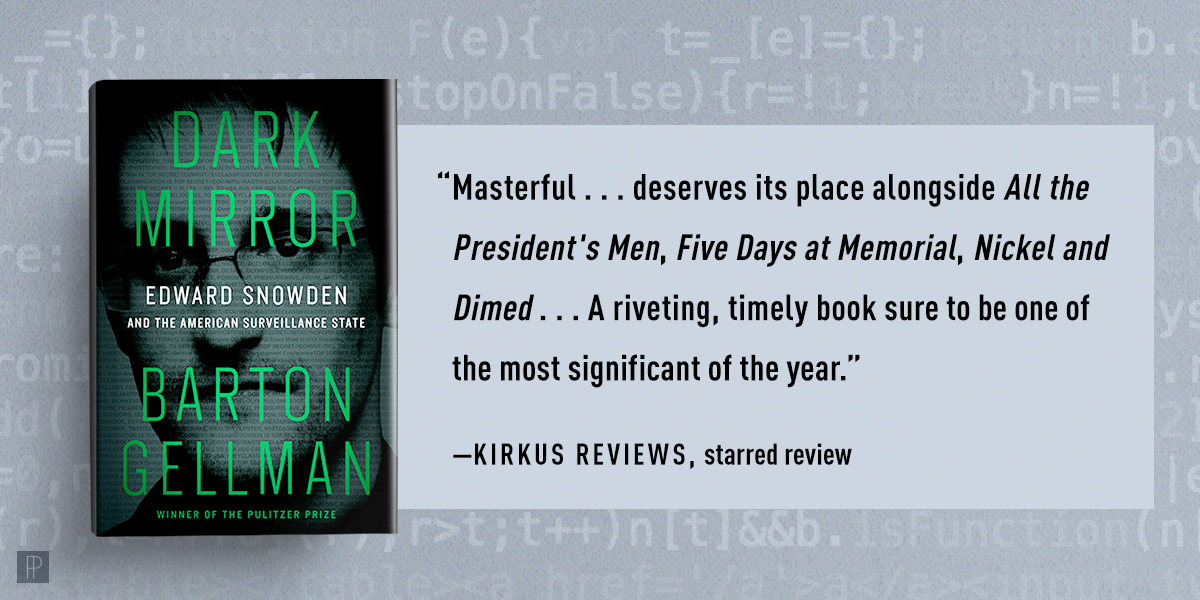 Selected for Best Books of 2020 by the Washington Post, Christian Science Monitor, Wired and Techcrunch.

“Partly a thriller about reporting the secrets the US government hoped to keep, partly a deeper exposé about the vast power the surveillance state built to pierce Americans’ privacy with a few keystrokes, Dark Mirror is a riveting page-turner that captures the danger and drama of the most important leak of classified material in generations. I lived part of this story in real time and am amazed at how many startling things I learned in these pages.”
—Carol Leonnig, three-time Pulitzer winner and bestselling author of A Very Stable Genius

“Bart Gellman is that rare combination of a tenacious reporter, a clear explicator of the most complex subjects, and a first-rate storyteller, all rolled into one. To say that Dark Mirror is based on his groundbreaking reporting on the NSA for the Washington Post is to undersell it: this book is a deep exploration of a surveillance apparatus of unimaginable magnitude, a chronicle of Gellman’s intense and sometimes fraught relationship with his enigmatic and controversial source, Edward Snowden, and an intimate, disarmingly candid reporter’s notebook about what it’s like to spend years watching the watchers, and realizing, along the way, that they are watching you back.”
—Patrick Radden Keefe, bestselling author of Say Nothing: A True Story of Murder and Memory in Northern Ireland

“Whether you love Edward Snowden or loathe him, Bart Gellman’s new book is essential reading for anyone who cares about privacy and national security. Gellman offers a riveting and often surprising account of his dealings with Snowden, who, for all his seeming idealism, also misdirected Gellman about some key facts. But whatever Snowden’s defects, the scope of the NSA global snooping campaign he revealed is more shocking than ever, as Gellman pieces together the puzzle. If you want to understand how intelligence works in the 21st century, Dark Mirror is a must.”
—David Ignatius, columnist for the Washington Post and author of The Paladin

“This is an enthralling tale of how Barton Gellman, one of the great investigative journalists of our era, worked to understand, process, and report the greatest and most challenging leaks of all time. Dark Mirror is a spy-thriller page-turner that delivers a fresh but complex portrait of Edward Snowden, a fair-minded but damning critique of America’s global surveillance behemoth, and a gripping, self-reflective master-class on how to discern truth in the dark shadows of the intelligence world.”
—Jack Goldsmith, professor, Harvard Law School; former assistant attorney general, Office of Legal Counsel

“Dark Mirror is a riveting narrative of investigative reporting in the age of surveillance. It is a dramatic, authoritative account not only of the significance of Edward Snowden’s revelations, but of what public interest journalism must overcome to inform citizens about their exposure to our dystopian Internet.”
—Steve Coll, Pulitzer-Prize-winning author of Ghost Wars and Directorate S

Dark Mirror is available direct from Penguin Press and from Indie Bound, Bookshop, Barnes & Noble, and Amazon. It is also sold as an ebook from Kindle, Apple Books and BAM! and as an audiobook from Audible, Audio Bookstore, Kobo, Libro.FM or Audiobooks.com.

Angler is available direct from Penguin Press and from Indie Bound, Bookshop, Barnes & Noble, and Amazon. It is also sold in Kindle format and as an audiobook from Audible or Audiobooks.com.